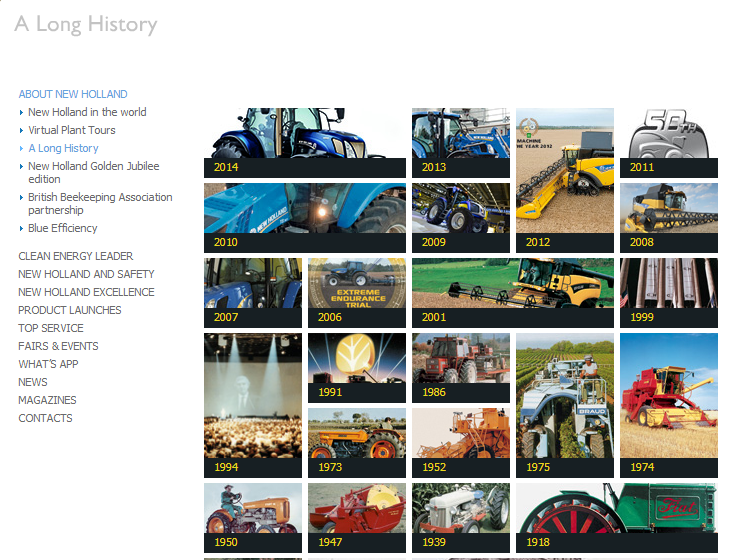 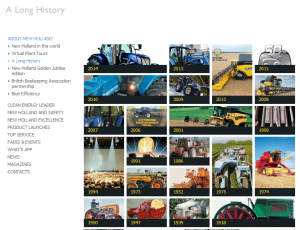 Abe Zimmerman began in an equipment repair shop in 1895 in New Holland, Pennsylvania, USA, which is where our name comes from. In the same year, Alexandre Braud introduced stationary threshers to farmers in western France.

Zimmerman started the New Holland Machine Company and was producing agricultural products, including a feed mill, to help the farming community around him.

In the early 1900s, Henry Ford had just started his automobile company in Detroit. Ford, whose mass-production methods revolutionised the automobile industry, also saw an opportunity to mass-produce tractors.

Leon Claeys, a Belgian mechanic, started to build threshing machines, and in 1909 built his
factory in Zedelgem, Belgium, where our factory still stands today.

Ford came out with the prototype for the world’s first mass produced, gasoline powered tractor, named an ‘automobile plow’.

this tractor went into actual production. It was renamed the Fordson Model F, and produced by a new business, Henry Ford & Son Company.

Fiat Model 702 tractor was launched and went into full production a year later at the car and truck plant in Turin, and won the International Ploughing Contest in Senlis (France). Model 702 was the very first Fiat agricultural tractor, as well as the first Italian tractor to be built on an industrial scale.

Fiat’s founder, Senator Giovanni Agnelli, wanted his tractor to become an integral part of Italy’s agriculture and so he began an association with the Italian agricultural co-operatives.

Ford introduced the 3-point hitch on the ‘N’ tractor Series: one of the most successful tractor families ever.

the company changed its name into Sperry New Holland and the same year it made a major breakthrough in hay harvesting technology with the introduction of the haybine mower-conditioner.

By the 1960s, Claeys was one of the biggest combine manufacturers in Europe.

Fiat 640, the most sold tractor of the famous Fiat “Nastro Oro” Series, was launched. An international success that still continues today.

Braud launched his first grape harvester, model 1020. This was further improved with the famous Braud 1014, the best selling grape harvester in the history of the vineyard, with over 2000 units sold in less than four years.

By the end of the 1970s, Fiat Trattori was selling to 140 countries around the world.

Ford was a major player and its tractor division had been responsible for a number of industry innovations, including the use of power hydraulics, rubber pneumatic tyres, diesel engines, and the 3-point hitch.

Fiat, who had acquired Braud, purchased an 80 per cent interest in Ford New Holland and the full integration process was completed at the official launch of New Holland at our worldwide convention in 1994. Under the ownership of Fiat, – through CNH, the sector born in 1999 from the merger between New Holland N.V. e Case Corporation –  it gained access to unprecedented resources, which enabled  the company to follow an aggressive plan of product renewal and take its customer service to a new level.

Opening of the Customer Centre at the Zedelgem Plant, Belgium

New Holland equipment supports use of 100% Biodiesel
New Holland announced its three-year sponsorship of the Italian football club Juventus. A partnership based on the common values as dynamism, teamwork, passion, commitment and victory . The sponsorship ended in 2010.
A white T7050 tractor is presented to Pope Benedict XVI

90 years of Fiat tractors is celebrated at the EIMA show in Italy
The latest rotary combine model, the CR9090 Elevation, is launched and sets a new world record for combine harvesting, recognized by Guinness World Records, with 551.6 tons of wheat harvested in eight hours unbeaten until 2011

New Holland announces Tier 4A solutions and is the first manufacturer to establish a clear road map towards the full achievement of the 2014 Tier 4B emissions regulations for 130 to 560 kW machinery with the exclusive use of the FPT Industrial SCR (Selective Catalytic Reduction) technology.

As a result of the demerger, Fiat Group becomes two new groups (both quoted on the Milan Stock Exchange) with two distinct logos: Fiat SpA and Fiat Industrial SpA; New Holland belongs to the second one.
Opening of the Customer Centre at the Basildon Plant, UK

The New Holland CR combine range was recognised with the “Maschine des Jahres 2012 – Machine of the Year 2012” award by a committee of journalists from Europe’s pre-eminent machinery publications.

New Holland unveiled a prototype T6.140 Methane Power tractor at Agritechnica. The T6.140 Methane Power, enjoys all of the features of a standard tractor and is equipped with a four cylinder, three litre engine produced by FPT Industrial, and develops a maximum power of 135hp and 620Nm torque.
New Holland Agriculture has reached the impressive production milestone of 50,000 TC conventional combines.

New Holland’s Basildon plant celebrates half a century of continuous tractor operations in 2014. To commemorate this important milestone, exclusive Golden Jubilee editions of the T7.270 Auto Command and T6.160 Auto Command will be produced and a range of celebratory events will take place throughout the year.

New Holland is a world leading agricultural equipment brand, offering the widest range of tractors and harvesters to suit the needs of every farmer and contractor. It is one of the most awarded brands for ground-breaking and accessible technology which improves farming efficiency and productivity.